“Service and quality second to none,” was the mission statement of William C. Akers, who founded the company bearing his name in Middletown, Ohio, in 1963 after leaving his job as Sales Manager at Inland Container. A former U.S. Marine who survived two tours of duty in Okinawa before returning home to begin his career working second shift on Inland’s corrugator while pursuing a degree at Miami of Ohio, Akers convinced his secretary and one Inland salesman to join him in his new venture: making and selling custom shipping solutions, wooden pallets, folding cardboard cartons and corrugated boxes.

With a primary focus on customer service, quick delivery, and no order minimums providing same or next-day delivery – essentially discovering the Just-in-Time (JIT) model long before the term became an industry standard – Akers made his first deliveries out of the back of his car before quickly growing to become a 10-person operation making boxes in a 20,000-square-foot facility in Middletown, just north of Cincinnati.

“To this day, nearly 60 years after the company’s founding, we continue to fulfill my grandfather’s mission that the customer must come first,” says Mike Akey II, the oldest of the Akers-Akey family’s third-generation and now president of the company; William C. Akers’ daughter, Marilyn, married Michael Akey, thus uniting one of the “first families” of the modern independent corrugated industry.

As president of Akers Packaging Service Group, Akey and his uncles Bill Akers (CEO) and Jim Akers (Chairman) have grown their grandfather’s once fledgling operation into one of the largest family-owned independent corrugated companies in the Midwest, with 13 facilities spanning the states of Illinois, Indiana, Kentucky, Michigan, Ohio and West Virginia. Akey’s cousin, Andrew Akers, is the company’s Managing Director. 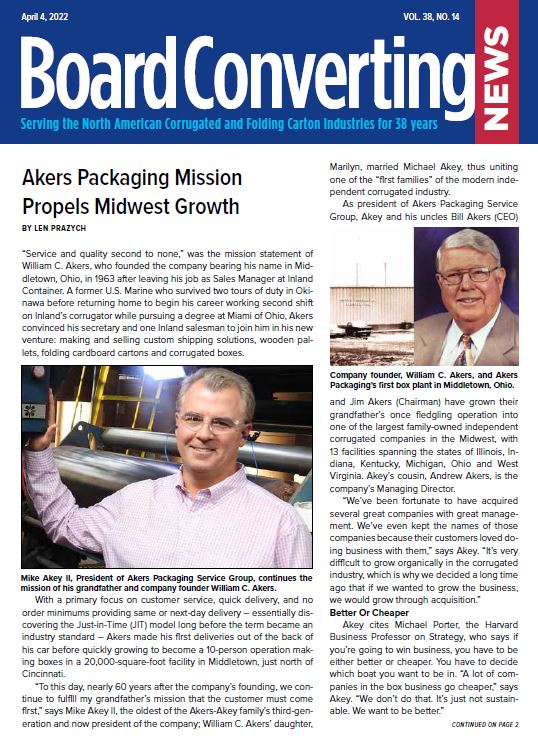 “We’ve been fortunate to have acquired several great companies with great management. We’ve even kept the names of those companies because their customers loved doing business with them,” says Akey. “It’s very difficult to grow organically in the corrugated industry, which is why we decided a long time ago that if we wanted to grow the business, we would grow through acquisition.”

Read the article in its entirety here.